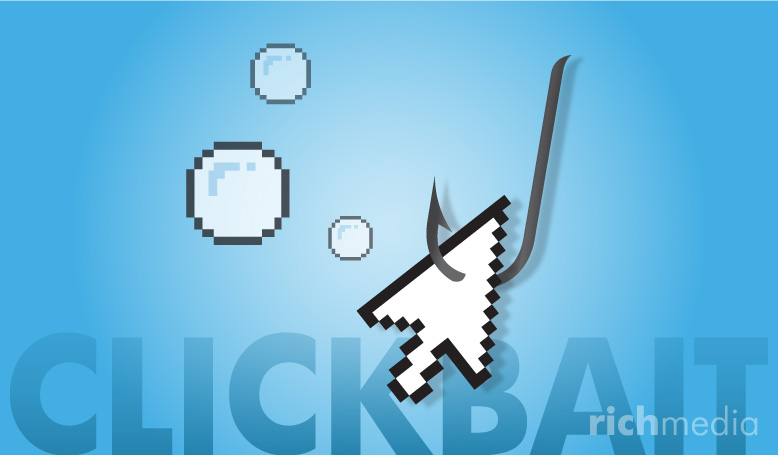 You might not know what clickbait is, but you have absolutely seen it. ‘The 8 Simple Ways Widgets Can Save Your Life.’ ‘This Man Has 4 Words To Say About Widgets That Will Shock You.’ ‘Is This Grandmother’s Widget Secret the Next Big Thing?’ They may be tacky, but there isn’t a web surfer alive so stoic they’ve never clicked on one. See for yourself. Use our simple Clickbait Generator to see how it can turn even the driest topic into an alluring headline.

Clickbait headlines are designed to, well, bait you into clicking – and judging by the astronomical success of clickbait practitioners like Buzzfeed, Upworthy and The Huffington Post, they are very good at it. But there is something unsavoury about these titles – they are frequently likened to carnival barkers, snake oil merchants and other dubious pitchmen. Clickbait is often thought of an ‘evil art-form’ in the content marketing world, but is does has valuable lessons to teach.

To help craft more compelling titles – without feeling evil for doing so – the following is a compiled list of tips that describe the secrets of creating clickable links while still letting people feel good after reading the article.

Exploit the ‘Curiosity Gap’ – the results will astound you!

The heart of clickbait resides in the curiosity gap – the implication that you, despite all your knowledge, will be surprised by the article’s contents. It’s the ‘Let’s Make A Deal’ school of temptation, and it works – almost unsettlingly so. Compare the dry ‘5 Facts About Widgets’ with the teasing ‘5 Facts About Widgets Most People Have No Clue About’ – part of you will always want to click, to prove to yourself that you do, even if you are the world’s leading ‘widgetologist’.

Of course, you don’t want to satisfy that curiosity before the jump. Putting too much information in a headline can close the curiosity gap, just as putting in too little won’t pique any interest. There really isn’t a point in clicking ‘3 Simple Things All Car Owners Should Do: Change Your Oil; Get Snow Tires; Don’t Text’ – just as there’s no real allure to clicking ‘3 Simple Things.’ The key is to reveal just enough to provoke a response, and no more.

Deliver on your promises

The biggest complaint about clickbait headlines is that the articles often won’t live up to the claims in the title. Exaggeration may get you a short-term bump in clicks, but will likely hurt your long-term reputation – just like in Aesop’s classic fable, ‘Boy Cries Wolf – His Village’s Response Is Unbelievable!’ Besides, if you have to bend the truth to get people interested, you have a larger issue – spend your energy reworking your headline or improving your content.

Write plainly and descriptively, rather than elaborately and densely. Being clever and witty is great at parties, but can actually be a hindrance on the web. This is because most people skim pages, rather than closely read all of them – with so much competing for our attention, we have learned to spread it wide, rather than focus it narrowly. So while that clever pun or literary reference may make you smile, it will probably fly over the head of most readers, who will scan it and five other headlines in a couple of seconds.

Don’t get so bogged down in the science of clickbait that you forget your readers are humans, of course. There is no exact formula for attracting their attention, and if you let your titles get too repetitive and formulaic, your readers will know. Give them credit, and be a little more discreet – your page will be all the more respectable for it.

There is something about numbers that draw in an audience – they have the feel of factuality, authority, and graspability. Tweets that have numbers or statistics in them see a 17% increase in retweets. ‘Listicles’ have come to dominate online content (this article being no exception!), likely because ‘6 Facts About X’ seems more bite-sized, and thus more attention-rewarding, than ‘X: A Primer.’

Testing and analytics are the lifeblood of content marketing. Clickbait came to be when certain types of headlines were found to generate far more clicks than others. However, poorly-done clickbait tends to have far lower page view time, fewer shares, and less social media engagement – a fact that Facebook is using to attempt to filter out clickbait from its users’ newsfeeds. This is good news for legitimate content marketers creating value-added content – but if you’re not using analytics, you won’t know if Facebook considers you legitimate!

There’s nothing inherently ‘evil’ about clickbait – at its core, it’s simply the art of writing (and testing) headlines that sizzle. They won’t sizzle for everyone every time, of course – you will have to find out what works best for your audience – but if you can make your links honest, creative and alluring, you’ll ‘Be Amazed to Discover the Most Useful Trick of Content Marketing!’

How Are Big Tech Companies Changing Pharma Marketing? Uber is getting into patient transport. Samsung is rolling out healthcare-providing bots. Apple healthcare continues growing. Amazon is entering the prescription drug market. The big tech companies are

Tell Your Story Using Tools, Dynamic Video and Customization Storytelling is a great way to think about your marketing practice. Stories are personal creations that reflect their creators and speak to their audiences. Stories are moving and exciting and contain n

How Can Digital Marketers Use Personalized Video?

How to Invest Your 2019 Digital Marketing Budget Wisely

Digital marketing never stands still for long. It’s one of the hardest parts of a digital marketer’s job – staying up to date in an evolving marketplace, and keeping your eyes peeled for the next big thing while making sure your fundamentals are sound, whi

How Customizable Financial Tools Can Connect With Customers

At Rich Media, we’re big fans of many things, but two of our biggest passions are interactive digital experiences and coffee. We couldn’t help but notice that our favourite experiences with both have something in common: customization. Ever

Content marketing has always been personalized and dynamic. In a world of static, unchanging websites, it stood out by offering new, regularly-updated, audience-targeted content. It was a step above the landscape in terms of interactivity, and it worked. Heck, it stil

Are You a Digital Marketing Master? Find Out With Our Quiz!

Do you eat, sleep and breathe digital marketing? Do you dream of being one of the digerati? Are you only content when you've got fresh content? Take our quiz to find out if you're a digital marketing master, novice, or disciple.

Send Your Content Back To School — Learner Types Boost Engagement

Jacket. Check. Lunch bag. Check. Snack. Check. It's time that content you've been lovingly caring for and protecting for so long go out and face the world. But what if nobody likes it? What if it gets called names like boring, irrelevant or even behind the times?

Ever go to a dinner party where your friend shocked your socks off with an unanticipated spectacular meal? How do you dish out awesomeness when you are seeking to snatch people’s attention? How do you invite the stay-and-click versus the dine-and-dash crowd? Keep it

Content marketing is quickly becoming the most important tool in a marketer's toolbox and there are lots of different options to choose from, but marketers have limited time and limited resources. What are the "Super Foods" of content marketing? If a marketer needed t

As marketers, sometimes the new thing in social media grabs our attention and we forget more obvious and more impactful means of delivering the message. Headlines, animated gifs and sound bites have been getting a lot of attention, but behind the scenes longer form co

Do you want a blow the lid off your content marketing hits and bring more zest to your financial institution's content? There are three ways that you can build in this kind of excitement around your content so that your message packs a punch. It takes a mixture of str