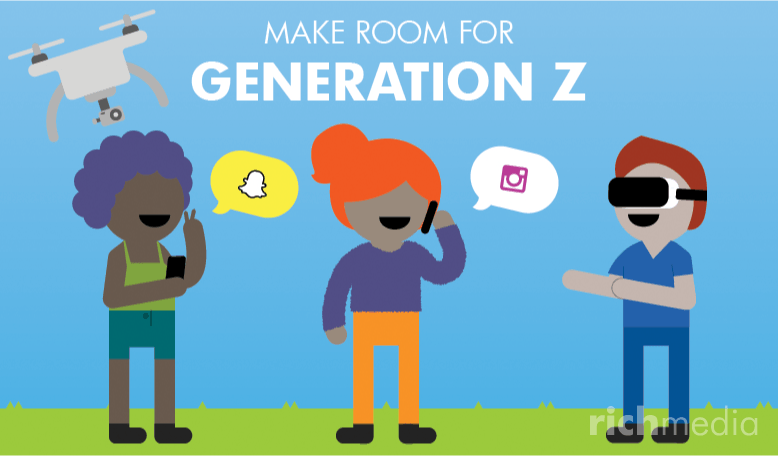 Who are these new graduates?

Move over Millennials! Generation Z kids, who were born between 1995 and 2010, are growing up fast. Generation Z, also known as the Centennials, are starting to join the workforce and they have a much different view of their future. Painfully aware of the great recession, the war on terror and global warming, Generation Z plays on the conservative side and tends toward pragmatic solutions backed up with a “work hard” ethos. Raised by Generation X, the pursuit of safer careers and realistic job prospects is higher on their list of likes.

Forbes says that Generation Z forms the biggest group within the U.S. population compared to both Baby Boomers and Millennials, a whopping 25%. And they are more Social Media conditioned than the generations that precede them – 60% use Instagram; Snapchat usage also ranks high (if not higher by some reports). While Generation Y and Millennials were the first to wade in to social media and be born with the internet, Generation Z never knew anything but high-speed Internet and grew up with social media embedded in it. Whereas Millennials witnessed the birth of the smartphone and had to beg their parents to buy them one, Generation Z already played with one in their cribs. As a result, Google calls Millennials ‘mobile pioneers’ and refers to Generation Z as ‘mobile natives’.

For Generation Z, shopping on Mobile and buying online are synonymous. Think with Google reported that 53% use smartphones to make purchases and 2 out of the 3 purchases are made online.

This generation loses sleep because they watch too much mobile video. So, it’s not a surprise that YouTube, Google and Netflix all ranked highest in both awareness and coolness, but name brands like McDonalds, Whatsapp and Yahoo with high awareness, lagged on the coolness scale when compared to Millennials.

The Great Recession - a Teacher

Generation Z saw the Great Recession of 2008 pummel both their parents and Millennials, yet they have interpreted such a workforce shock in a unique way. No doubt, the recession is the reason why job security is a paramount concern. They’ve collectively decided that they can’t rely on jobs from others or from Fortune 500 companies and they’ve made a decided turn toward entrepreneurship and well known career tracks like law, engineering, finance, software programming and project management.

Including a greater percentage of black, Hispanic, Asian and mixed race individuals, Generation Z has a bold new face representing greater diversity. Trends are driven by social media influencers and numbers of followers can equate to social status in the real world. Generation Z also uses technology to show friends their creativity with photo sharing, video, music, fan-fiction and more. Because there are no borders about who they follow, interact with and learn from, Gen Z can engage and find friends throughout the world, giving them a better understanding of different cultures - an edge that will one day parlay well into roles in global business.

Generation Z functions as a more socially conservative lot who post more judiciously. More self-conscious and aesthetically focused – perhaps due to the need to fill a regular regime of selfies – Generation Z takes grooming as seriously as they curate their social media presence. Generation Z also fits the bill of social conservatism in a good way. According to the Annie E. Casey Foundation, surveys found a 40% reduction in teen pregnancy, a 38% drop in alcohol and drug abuse, as well as a 28% reduction in the high school dropout rate.

Don’t lump Generation Z in with Millennials! These digital natives are the most pragmatic, technology savvy and social media aware cohort yet. Although they are YouTube sponges, they tend to be more tech savvy, realistic, hard-working and entrepreneurial – all important attributes to pay attention to, as businesses pour over big data and embrace artificial intelligence. Generation Z will also comprise the bulk of consumers too, as their influence drives online, mobile first shopping. With the oldest of the Gen Z crowd wrapping up college and university programs, they are most certainly on their way downtown to look for work, potentially seeking cool brands for both shopping and employment.

Halloween... a time for ghosts and goblins to stir, a time to decorate houses with ghoulish zombies and to stock up on candies, chips and chocolate for trick or treaters. Whether you're part of the 86% of parents who shamelessly steal candy from their children's haul or part of the 18% who

Alexa, What Does The Internet of Things Mean For Financials?

What is it? The Internet of Things (IoT) is the whole ecosystem of internet-enabled devices. Not just computers and smartphones, but smart everything – smart fridges, smart homes, cars (driverless or otherwise), and even the kitchen sink. If it has a small compu

Have you ever wanted to delve into the psyche of your consumer? Find out what makes them tick or gets their attention? What motivates them to take action? What will they think of your new website, online tool, or marketing strategy? A focus group can certainly help un

When customers visit our store, online or in person, it is an opportunity to borrow a little bit of their time and gather some feedback about our products and services. The intercept survey is a tool that can be used for this purpose. Most of us have perhaps come acro

As web designers and information architects will tell you, web site content can be organized in many ways. Ideally, the organization of topics on a site should follow a pattern that makes sense to the site's target audience. Card sorting is a research technique that i

The Cost of Love on Valentines Day Infographic

Valentine’s Day… a day to celebrate your loved ones, indulge in chocolates and satisfy your craving for heart-shaped candy! Whether you’re part of the 54% that plans to celebrate Valentine’s Day or someone whose more on the get-that-arrow-away-from-me-cupid si

6 Types of Research You Should Consider

As the digital customer walks around virtually and checks out your products and services, what are you doing to make sure that they stay on permanently? Do you know their likes and dislikes? Do you understand whether they have any trouble while browsing around your we

Eye Tracking in Market Research – Don’t Just Take My Word for it!

Let's do a quick exercise. Pretend I pulled up a website you've never seen before and I start asking you some questions: "Can you find the phone number quickly?" "Is the navigation laid out clearly?" "Can you find the call to action within a couple of second

Digital marketing has come a long way since the “build it and they will come” mentality. Technology is constantly changing, but there is a new sense of order and maturity as social media, mobile technologies and content marketing have gone mainstream. Digital budg

Mix Storytelling and SEO so Your Customers Find You

You've built the perfect content article. It’s a brilliant summary of a solution that your clients will resonate with and relate to because it contains a real personal story. It even includes something to tug at the heart strings. The content is solid. It should be