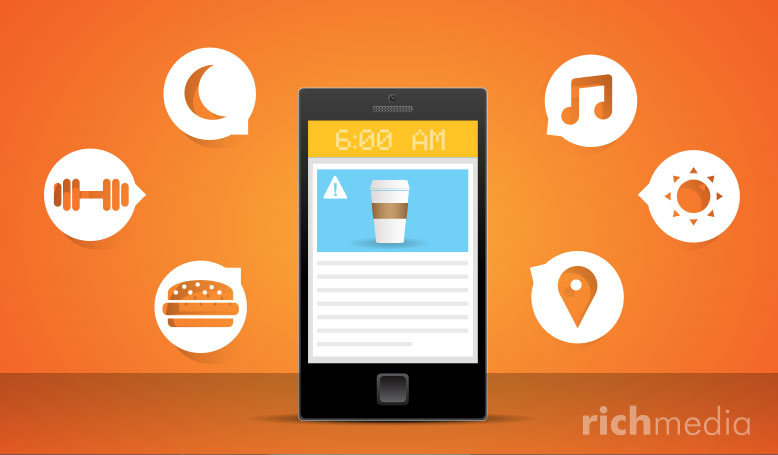 Two new phrases have recently appeared in the tech world: microinteractions and micro moments. You could be forgiven for assuming that ‘micro’ is just this year’s trendy prefix, and that you could safely ignore all ‘micro’ discussion, but you’d be wrong. The ‘micro’ at hand – small, predictive features delivered pre-emptively or just when the user needs them – are one of the most promising ongoing revolutions in product design and marketing. They may have the ‘buzzword-of-the-moment’ feel, but make no mistake: these small touches are big ideas.

Microinteractions – The Design Is In The Details

Let’s start with microinteractions. Coined by designer Dan Saffer, the term denotes small details in web and app design that subtly humanize, help, impress or soothe. While usually nice to look at, their main purpose is to give the user feedback right when they’d like it, or ideally, before they even know they’d like it – think Gmail prompting you that your email (which includes the phrase ‘I’ve attached’) does not have an attachment, or the iPhone’s subtle direction-indicating ‘slide to unlock’ shimmer.

The charm of microinteractions lies in how organic and natural they seem, even though they’re meticulously designed and strenuously tested. Consider the way your mouse cursor changes depending on what it’s hovering over: text results in a text-selection icon, links and buttons get a clickable-looking icon, and so forth. Any questions you have about what will happen when you click are pre-emptively answered by the icon. And if the computer is running so slow that it can’t update the cursor, sure enough, the cursor will become a ‘loading’ icon. It seems obvious now, but it wasn’t always so – it took a lot of work, testing, and thought.

The concept isn’t anything new, but it has only recently been singled out and made concrete. By knowing your user, and how your product is used, you can identify key points at which they might get lost or frustrated, and bridge that gap with a small, helpful microinteraction. In some cases, they can become iconic, and part of a brand identity – ‘You’ve Got Mail,’ anyone?

Micro Moments – Knowing Your User Better Than They Know Themselves

The concept of micro moments comes to us from marketing, rather than design, and from no less an authority on the subject than Google. Micro moments refer to those almost countless instances when we reach for our phones for a need of some urgency: we’re in the kitchen and need a recipe; we’re late and looking for a building; we’re leaving a party and need a ride.

Before smartphones, you would have to look things up beforehand, or else you wouldn’t know them when it was crunch time. But by having the whole internet in our pockets at all times, we’re always connected – we plan to look these things up on the fly, and increasingly, to make purchase decisions on the fly. Using phone data – location, acceleration, time, personal history, etc – these micro moments can be predicted, acted upon, and marketed to.

If a user is in the kitchen just before dinnertime and pulling out their phone, the odds are pretty high that they’ll be looking for a recipe – why not pop one up for them? If they’re out driving at a time when their calendar says ‘Dinner at Joe’s,’ why not give them directions – or offer to call Joe? If it’s 2 A.M. and they’ve been dancing for hours, why not have Uber or a cab number prepped and ready for them? Heck, why not pop up a budgeting app the next morning, and scold them for spending so much money?

The core of the micro moments idea is that these moments happen, and if you’re not marketing to them, you’re losing the race to those who do. Predictive assistant apps like Google Now can already more-or-less tell what their users are going to do before they do it – in defining micro moments, Google is encouraging planning for predictive advertising, predictive user assistance, predictive everything. In those split seconds, brand loyalty is secondary to sheer convenience, and fortunes can be made or lost in those instants.

Making Micro Work For You

They may seem minor, but microinteractions and micro moments are significant steps towards the future of human-computer interactions – sleek, minute, and almost impossibly informed. How many sci-fi films open with a computer raising the blinds, making coffee, and reminding the star that it’s his or her daughter’s birthday? Programs that know their users’ habits and proactively assist them have been the stuff of dreams for decades, and now, all of a sudden, they’re here.

At present, ignoring them will do no harm. But the present never sticks around for long. These predictive touches may seem luxurious now, but they’ll seem essential tomorrow. Cleverly thought-out and tested microinteractions can help provide the user experiences dreams are made of. As more wearable devices with limited screen space and input ability enter the marketplace, intuitive programs that can give the user what they want without even being asked will soon become the default. Thinking of how your app can provide useful notifications in micro moments can give you an edge in usefulness over every competitor.

How Can Pharma Marketing Use Personalized Dynamic Video?

What is personalized video? Personalized video (also called dynamic video) looks and plays like a regular video, but can be changed and updated on the fly. A simple example is a video that greets you with your own name – normally, you’d have to make thousands

Everything You Need to Know for Awesome Product Videos

Product videos are a great way to reach potential clients and show off what you have to offer. If your product video is done well, you can convert your audience to a customer in just a few short minutes! Here are 5 ways to make sure your next product video is awesom

Animation is a series of pictures that tells a story with movement, but it takes a special skill to make us believe in an onscreen personality. Walt Disney understood this very well, and he had a unique formula to make his characters appear lifelike. He wisely i

What Makes a Good Infographic

Wondering what makes an awesome infographic? Luckily, we've created an infographic on just that! Check it out and you'll be on your way to creating something that stands out from the crowd and gets your message across! See Also: W

7 Types of Video That Will Boost Your Digital Marketing

Video-based digital marketing is widely recognized as an extremely engaging way to capture online visitors’ attention. Video adds richness by enhancing the layers of communication and adding colour and flavour, giving any marketing pitch a fabulous boost. Before usi

Video Terminology – Turn yourself into a digital marketing genius

Lights, camera and action! Everyone is familiar with a director’s callout to start filming a scene, but would you get called out as a newbie if you didn’t use the right video terms? No worries, here’s a short list of terms that will have you talking like a digit

How to Make and Create Fantastic Video

Video is a powerful way to get an online message to your visitors. Making good video needs a focus on solid content - the key messaging - to make sure it's effective and clearly gets the point across. But how do you move your video from good to great...or better yet,