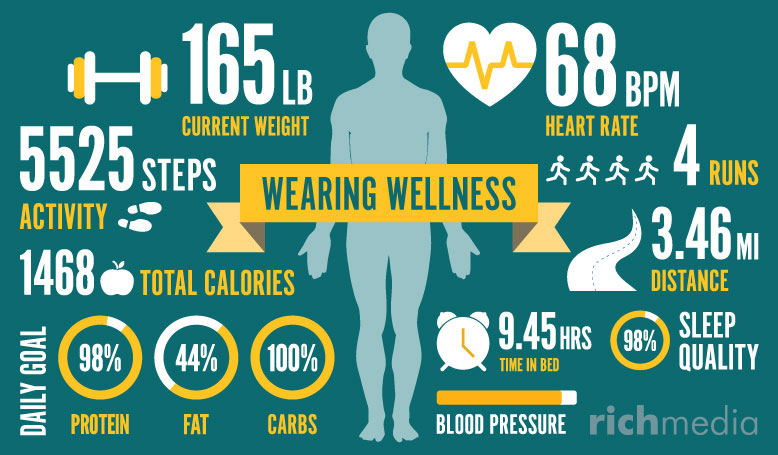 The future is now, it seems – wearable ‘smart’ devices, so beloved of science fiction, have finally hit the market in a very big way. The last few years have seen the rise and success of a variety of wearable tech, from smartwatches like the Apple Watch and Samsung Gear, to fitness bands like those from Fitbit and Jawbone, to an ever-growing array of devices of all shapes and sizes.

While the mad dash to find new uses for wearables is still ongoing, health and wellness have emerged as the early leaders, and for good reason. Wearables provide constant, close contact with users like no tech ever has before, and with their ever-developing sensor technology, they can provide invaluable information to users and health care providers that once would have taken hugely expensive studies.

With that in mind, the following are five areas in which wearable devices can have a uniquely positive impact on health and wellness.

Fitness tracking was the first successful wearable app, and for good reason – smartphones had opened up the exercise app market, but were clunky to actually exercise with. Into this gap came fitness bands and smartwatches that could fit around your wrist or ankle, measure your distance, speed, steps, calories burned and even heart rate, and sync the data with a mobile app on your phone.

Now, rather than just go for a jog, you can race against your past runs, get urged on when your speed or heart rate starts flagging, even flee from a horde of virtual zombies (if you’re into that kind of thing). Through gamification, encouraging feedback, and fitness stat collection, wearables and their apps have found new and exciting ways to get people motivated to get in better shape. Some even go the extra mile – like Charity Miles, which offers to match every mile you run with a donation to charity.

The technology is improving constantly, too. Phone manufacturers like Apple, Google and Samsung are even standardizing how fitness data is recorded and stored, opening up the door for this data to eventually be used by health care professionals. Sensors are improving, giving more accurate results for more values than before, and creating exciting new opportunities to encourage exercise.

When combined with wearable tech and a fitness measurement app, diet tracking apps can give users a complete fitness portrait of themselves. Far more than mere diet diaries (though those are effective weight management tools in their own right), diet tracking apps can log meals and calories, scan food product barcodes, analyze eating and exercise patterns, and suggest recipes.

Smart scales – app-connected bathroom scales that function like stationary wearables – make the experience complete. By taking the guesswork out of diet, weight loss, and exercise, and in combination with the usual gamification, diet tracking apps are a new, effective way to help combat obesity and its associated conditions.

The mind and body are deeply connected. By measuring physical activity, wearables can tell us not just about our physical habits, but our mental state as well. Most wearables can analyze our sleep patterns and tell us if we’re not getting enough rest as we should. Some can even measure our ‘skin conductance’ – the state of our sweat glands, which is a strong indicator of sympathetic nervous system arousal, better known as stress. Wearables can figure out not only whether we’re exercising, but whether we’re at the end of our ropes.

There are many possibilities for what to do with this knowledge. An app could offer questionnaires to help contextualize this stress data (excitement is almost identical to anxiety, from the body’s perspective). Another could take these cues and offer mindfulness suggestions – meditation, and deep breathing exercises. All of them should offer contact information for mental health professionals. But since common conditions like depression and anxiety are such strong predictors of early death, and since professionals cannot be around constantly, mental health monitoring apps can help ensure sufferers get help and support on an ongoing basis.

Apps to help quit smoking have met with success in recent years. Some are stats-heavy, encouraging users by calculating how much money they have saved or tar they have not inhaled. Some are game-inspired, offering trophies and points for reaching milestones – a good idea, given how both cigarettes and video games can activate similar dopamine responses in the brain. But while traditional phone apps can only offer after-the-fact kudos, and while wearables specific to smoking cessation are still a few years away, today’s most popular wearables can do something totally new: predict and pre-empt relapses.

Certain biological factors – heart rate, breathing patterns, sweating – can indicate a physiological craving for nicotine is about to begin. Coupled with statistical data common to many smokers (for example, that most cravings happen in the morning, in the evening, and after meals), wearables can detect when quitting smokers are most likely to cave, and offer just-in-time interventions, such as supportive texts or phone calls from a coach or sponsor.

The problems caused by patients improperly taking medication are vast. Despite doctors’ and pharmacists’ best intentions (and penmanship), people are people – they forget to take pills, they take the wrong amount, and so on. To this end, a simple app with an alarm function, dosage instructions, as well as refill and appointment schedulers, can help ensure that medications are being taken properly.

As memory naturally degrades as we age, an insistent reminder affixed to our bodies has obvious benefits. It’s harder to misplace a watch than a phone, and much harder to not feel a vibrating notification when it’s strapped to your wrist. In addition to improving prescription compliance, medication management apps could also provide information to caregivers and doctors, giving them a clearer picture of our medication-taking habits, and helping guide further treatment. It’s a solution whose simplicity belies the extent of its effect.

These are just the tip of the iceberg. The true health and wellness potential of wearable devices is just beginning to be discovered. Apps that were impossible on smartphones – asthma managers, diabetes ‘alarms,’ flu tracking apps, seizure monitors and many more – are beginning to be seen. The frontiers opened up by wearable tech are launching a new gold rush, with improved quality of life as the prize.