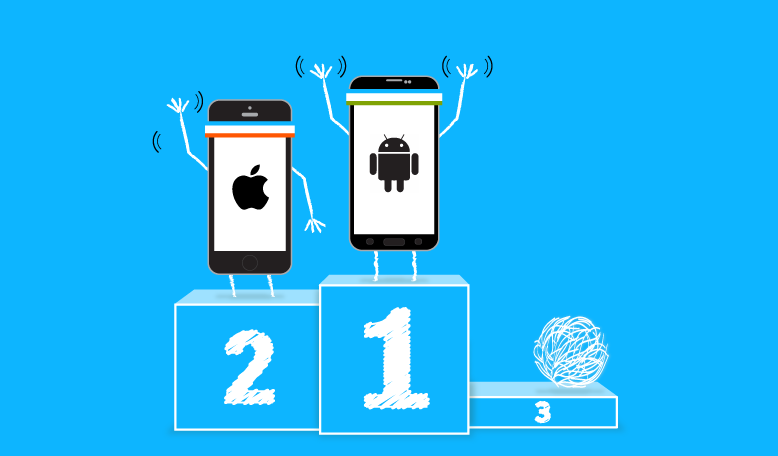 The smartphone market has been relatively quiet lately. In the absence of a major change in the technology, and as the market penetration of smartphones approaches 100% capacity, things seem like they’re quieting down. But that doesn’t mean nothing has been happening.

From a distance, the global smartphone market today looks much like it did a year ago. Worldwide, Android accounts for 72% of all phones, iOS for 19%. Of course, North America is the exception to this – here, Android and Apple are neck-and-neck, at 50% and 48% respectively. You might notice something missing from this – and you’re right. Windows Phone is all but vanished, meaning that, for the time being, the smartphone OS market is a two-horse race.

The growth of the mobile market has slowed to a crawl, with sales only increasing by 4.3% last year. Samsung and Apple’s are the clear leaders, although that may soon change: Huawei, OPPO and vivo have become the next three biggest smartphone vendors in the world, and they’ve done so almost exclusively in the Asian market.

But these waters are not as still as they seem – as the IDC report says, “we continue to witness a shift in many companies' portfolios geared towards affordable devices with premium-type styling compared to flagship models.” Mid-range phones are gaining in popularity, and their look and UX are increasingly similar to those of high-end phones. It’s fair to assume that such phones’ users will be expecting high-end performance on mid-range devices.

See Also: WHAT IS MOBILE-FIRST (AND WHAT IS IT TO YOU)?

Mobile user expectations are on the rise, as are mobile user numbers. 50% of worldwide web traffic is now mobile, and that percentage is increasing. Granted, North American web traffic is still only 36.7% mobile, but check back in a year or two. Phones are getting faster, mobile data is getting faster, and people’s everyday habits involve smartphones more and more. We might be looking at the end of the mobile revolution, and the beginning of the mobile era. If you’re not already, it’s time to start thinking mobile-first.