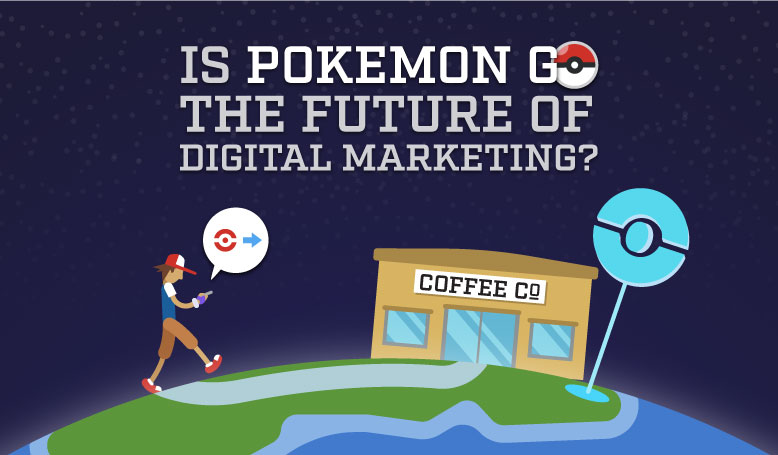 It’s official: Pokémon Go, the latest offering from the Pokémon universe, is a runaway smash. Good news for gamers, and, as it turns out, good news for marketers – Pokémon Go might be the first big step towards the location-based revolution in digital marketing that has long been promised.

Pokémon Go is an “augmented reality” mobile game. Working with Google Maps, users walk around – in the real, actual world – catching Pokémon with their phones. Different areas have different Pokémon – want a water-type Pokémon? Hit the beach! Want a rock-type? Head for the hills! Once you’ve got them, you can take them to a Pokémon gym – always located in a public space, like a park or square – and battle other trainers for control of said gym.

There have been location-based games before now. But Pokémon Go is more than just a game – it’s a craze. Despite only being three days old, and only officially available in a few countries, it already has more users than Twitter and more engagement than Facebook. Despite concerns about its monetization, it’s increased Nintendo’s stock price by 25% - again, in just three days.

Most interestingly of all, Pokémon Go is surprisingly social. Since the game requires users to walk around, hordes of phone-glued people have taken to the streets. When a rare Pokémon appears, word spreads fast, and crowds of players quickly congregate. The nature of the game gets people out in public and out amongst each other – it can turn otherwise quiet areas into briefly bustling hubs.

This has seen the rise of a new form of experiential marketing – Pokémarketing, if you will. Users can purchase “lures” – beacons that attract Pokémon, and thus Pokémon hunters, to a particular spot for a limited time. Enterprising retailers have seized on this to turn their businesses into Pokémon havens, and reaped real rewards. There is already talk of letting companies and brands purchase “sponsored locations,” taking this concept to the next level. The game is so popular, and so location-based, that its users are a mobile audience that marketers can put where they want, when they want.

Looked at this way, Pokémon Go is part game, part location-based experiential marketing medium. With so many users and with such incredible engagement, marketing to Pokémon Go is as worthwhile a marketing avenue as any of the big apps – from Snapchat to Facebook. It’s an environment unto itself – and an example of how the mobile landscape is opening up new, undiscovered customer experiences and marketing opportunities.