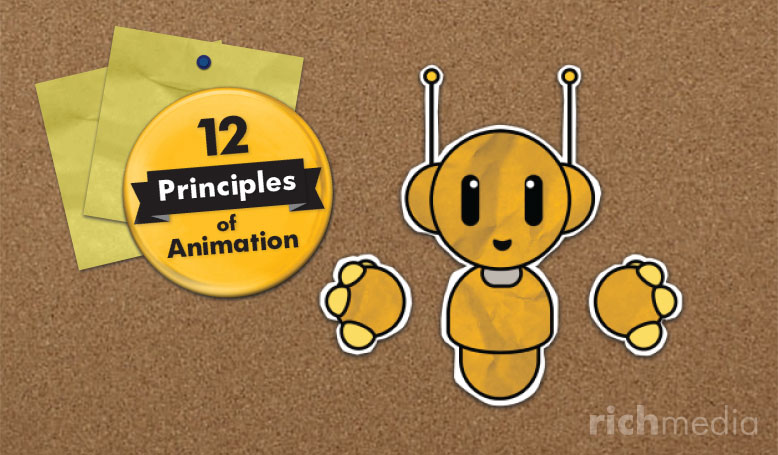 Animation is a series of pictures that tells a story with movement, but it takes a special skill to make us believe in an onscreen personality. Walt Disney understood this very well, and he had a unique formula to make his characters appear lifelike. He wisely instructed Disney animators using twelve principles of movement that he borrowed from the real world, astonishing viewers when his drawn characters sprang to life.

See Also: VINE - SAY IT WITH A VIDEO

Watch Robbie’s torso as he jumps. Notice how it doesn’t stay perfectly rounded? It bends, squashes and stretches like a tennis ball striking a tennis court. This approach makes objects act as we’d expect so it doesn’t look like Pong.

Robbie doesn’t just zip forward. He winds up, leans back and uses his whole body to shoot forward like a sprinter blasting out of the starting blocks. Walt knew that without this anticipation, momentum and gravity appears off.

Front and center during his performance, Robbie waves and smiles to catch our attention. This staging approach uses a dramatic movement by the character or a prominent position in the frame to ensure that the audience’s eye stays focused on the most important character or activity.

Notice how Robbie pauses before swinging his arms? It emphasizes that move so when he switches to his next step we see him dance. Pose to pose helps call out key frames in a movement to show the character’s kinetic energy. It causes our minds recognize patterns in the movement.

Watch Robbie sway back and forth as if blown by the wind. Notice how his antennas bounce and swing more wildly than his torso. Including these subtle speed differences captures a body in motion, showing the natural physics of a character’s ‘skeleton’ underneath.

Slow In and Slow Out

See Robbie fly back and forth with his movements blurred for emphasis. The mind anticipates the beginning and ending of an activity. To mirror this kind of action, an animator adds more frames at the beginning and the end with fewer key frames in between to give the illusion of speed or slow motion, giving dramatic emphasis to starting and stopping.

Robbie is swinging upside down like a monkey to show that bodies move in arcs. Notice how his arms follow a natural sweeping motion through the air. Without moving shoulders and elbows or arms and legs on an arc, animated movements would be jerky and mechanical instead of natural and smooth.

Will Robbie keep the ball in the air or drop it? Watching his smile and balancing arms we see how hard he’s concentrating to keep it bouncing. Also notice that he’s blinking the odd time from the impact – all these subtle movements make for a richer animation experience. Disney made it clear: secondary action should enhance the primary activity, or it should be left out.

Just like people, each unique character should move in its own manner. See how Robbie floats gracefully through the air while another character might move in a clumsy fashion. Walt knew that timing shows that personality in action, and more important, tells us about that character too.

Boo! Did Robbie scare you? Big movements and changes in size and proportion help emphasize emotions and provoke an audience reaction. An adept animator can exploit exaggerations to create moments ranging from the poignantly serious to the wildly comical.

In this Vine video, Robbie shows how his solid form interacts with his blueprint. Clever Walt understood that it’s natural for the audience to look for the volume and the three dimensional wholeness of characters and objects in their world.

See Robbie transform his appearance to romance the audience. The subtle wardrobe change makes him immediately more appealing and likeable. A great animator will adjust the eyes and facial expressions to express subtle quirks and characteristics, creating a unique appeal for each character.

How Can Pharma Marketing Use Personalized Dynamic Video?

What is personalized video? Personalized video (also called dynamic video) looks and plays like a regular video, but can be changed and updated on the fly. A simple example is a video that greets you with your own name – normally, you’d have to make thousands

Two new phrases have recently appeared in the tech world: microinteractions and micro moments. You could be forgiven for assuming that ‘micro’ is just this year’s trendy prefix, and that you could safely ignore all ‘micro’ discussion, but you’d be

Everything You Need to Know for Awesome Product Videos

Product videos are a great way to reach potential clients and show off what you have to offer. If your product video is done well, you can convert your audience to a customer in just a few short minutes! Here are 5 ways to make sure your next product video is awesom

What Makes a Good Infographic

Wondering what makes an awesome infographic? Luckily, we've created an infographic on just that! Check it out and you'll be on your way to creating something that stands out from the crowd and gets your message across! See Also: W

7 Types of Video That Will Boost Your Digital Marketing

Video-based digital marketing is widely recognized as an extremely engaging way to capture online visitors’ attention. Video adds richness by enhancing the layers of communication and adding colour and flavour, giving any marketing pitch a fabulous boost. Before usi

Video Terminology – Turn yourself into a digital marketing genius

Lights, camera and action! Everyone is familiar with a director’s callout to start filming a scene, but would you get called out as a newbie if you didn’t use the right video terms? No worries, here’s a short list of terms that will have you talking like a digit

How to Make and Create Fantastic Video

Video is a powerful way to get an online message to your visitors. Making good video needs a focus on solid content - the key messaging - to make sure it's effective and clearly gets the point across. But how do you move your video from good to great...or better yet,